On June 14, in the magnificent setting of Le Mans, the new Ligier JS P4 was presented to the public by Onroak Automotive. The brand does not need any introduction and to make public the new sports prototype was the French entrepreneur and "gentleman driver" as well as a majority shareholder of HP Composites, Jacques Nicolet. 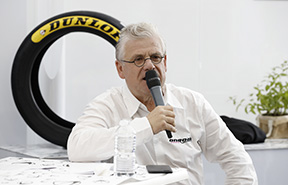 This model adds to the range of cars already manufactured by HP Onroak and ranking  among the CN categories and LM P3.Approved in the FIA category Free Formula Racing Cars (Group E) was designed to take part in national and international competitions such as the V & V Endurance Series, the 24H Proto Series, GT & Prototype Challenge, Spint Sèrie, the 25H of Tunderhill and the 12H of Abu Dhabi, Club & National Series.

The new Ligier JS P4 will be produced in the Ascoli Piceno plants, where we will proceed with the construction of the bodywork and structural parts in composite material (in Carbon fiber), making the Made in Italy protagonist in all the most important circuits in the world.